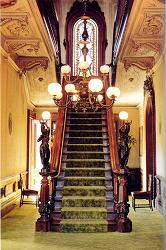 The Romantic Style (1820-1880) of American houses grew in popularity in a time when the U.S. was attempting to break free from English culture and looked to the ancient world for architectural inspiration. While architects like Thomas Jefferson gained influence from Rome designing Early Classical and Colonial Revival styles, other American architects delved even deep er in to the past of ancient Greece, the "mother of all democracies". This inspired the Greek Revival Style which dominated America's commercial and residential building types from about 1830 until 1850. In the 1840s, another fashionable Renaissance style arose which was primarily influenced by the cathedrals, castles, and manor houses of the Middle Ages; the Gothic Revival style. The final Romantic House Style, Italianate, also borrowed from Renaissance designs with Italian farmhouse influences combined with Americanized doors, windows, and decorations.

How to Spot a Romantic Style House 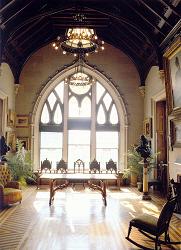 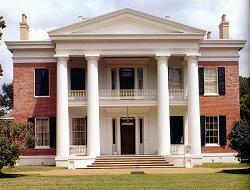 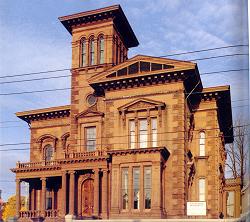 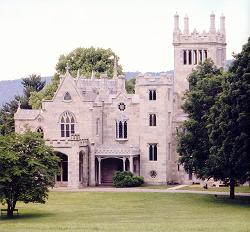 The architectural brilliance of the residence, designed in 1838 by Alexander Jackson Davis, is complemented by the park-like landscape of the estate and a comprehensive collection of original decorative arts.

This 1800s Greek revival-style mansion represents the hieght of Southern prosperity and the "Cotton Kingdom." Built by the John T. McMurran family beginning in 1841, Melrose was, according to McMurran daughter-in-law Alice Austen, "very elegant; one of the handsomest places I have seen North or South.

2013 Gold Medal Winner of the Benjamin Franklin Award for Best New Voice in Non-Fiction, and 2013 Silver medal Winner of the Georgia Author of the Year Award in History. Ghosts of Grandeur: Georgia's Lost Antebellum Homes and Plantations is a compelling look into 94 of Georgia's most historic lost mansions and plantations which have been lost to the ages.

Great Houses of the South

An exquisitely photographed collection of the great houses and mansions of the South.

Lost Plantations of the South

he great majority of the South's plantation homes have been destroyed over time, and many have long been forgotten. In Lost Plantations of the South, Marc R. Matrana weaves together photographs, diaries and letters, architectural renderings, and other rare documents to tell the story of sixty of these vanquished estates and the people who once called them home.

Ten House Styles is a collection of Design Plans inspired by ten significant house styles.
Off
Log In
Sign Up
About Us