Chateau-sur-Mer is a landmark of High Victorian architecture, furniture, wallpapers, ceramics and stenciling. It was the most palatial residence in Newport from its completion in 1852 until the appearance of the Vanderbilt houses in the 1890s. It was the scene of memorable entertainments, from the "Fete Champetre", an elaborate country picnic for over two thousand guests held in 1857, to the debutante ball for Miss Edith Wetmore in 1889.
Scroll down for more information


Chateau-sur-Mer's grand scale and lavish parties ushered in the Gilded Age of Newport. Chateau-sur-MerChateau-sur-Mer ballroom was built as an Italianate-style villa for China trade merchant William Shepard Wetmore. Mr. Wetmore died in 1862, leaving the bulk of his fortune to his son, George Peabody Wetmore, and a generous allowance for his daughter, Annie Derby Wetmore.

George married Edith Keteltas in 1869. During the 1870s, the young couple departed on an extended trip to Europe, leaving architect Richard Morris Hunt to remodel and redecorate the house in the Second Empire French style. As a result, Chateau-sur-Mer displays most of the major design trends of the last half of the 19th century.

George Peabody Wetmore had a distinguished political career as Governor of Rhode Island and as a United States Senator. He died in 1921 and his wife in 1927. They were survived by their two daughters, Edith and Maude, who never married. The house was purchased by the Preservation Society in 1969. In 2006 it was designated a National Historic Landmark. 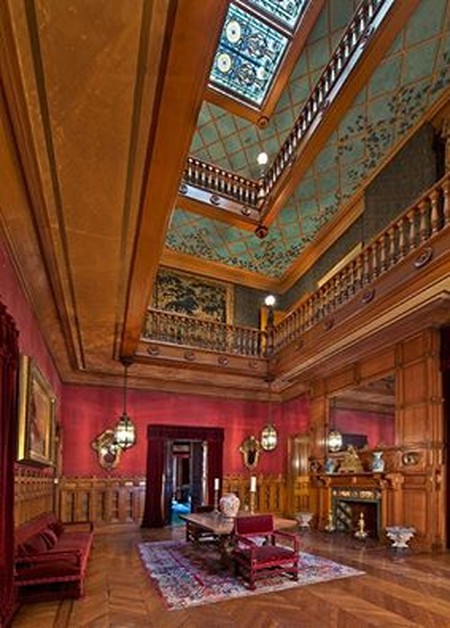