The Flippin House National Historic Site locally and affectionately known as The Castle is built high on a hill above the town of Clatskanie on Highway 30 just 60 miles from Portland and 35 miles from Astoria.

The original owners of The Castle were Thomas and Florence Flippin who established the West Oregon Lumber mill where Tom began saving the best lumber for the grand house he was determined to build in Clatskanie. When their children were old enough to go to school, they purchased property adjacent to the school and construction began on this Victorian-style mansion in 1898.

The Flippin family, which included two sons and a daughter, moved into the house in 1900. To Thomas Flippin, building this house represented his moving up in society as a prosperous lumber man, but to his wife Florence, who had also worked in their lumber company; it represented a refined way of life that she disliked. After living there only three years, the couple moved out, and then separated.

Later owners of The Castle included the Hempel and Holman families. For many years in the middle part of the 20th century, The Castle was divided into apartments. In the early 1970's it was purchased by George and Ann Salmi and was sold to the Clatskanie Senior Citizens Inc. in 1979 who own it today. 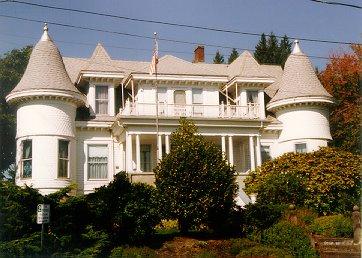