Gray Hall, NC
This view shows the seamless joining of the older building which served as La Vallee Academy, not to mention the gorgeous Carolina blue sky.
Completely private, very quiet, yet less than 10 miles from I-95.
Scroll down for more information

The Parlor
Where guests were received to discuss the price of cotton, politics or religion

Gray Hall is an elegant temple Federal Plantation home, currently listed on the National Register of Historic Places. Construction may have ranged from the late 1700s to 1820. This house features a formal living room, dining room, a grand hall, and two smaller halls on the second and third floors, a large keeping room, breakfast room, four bedrooms, and two full baths. There are five porches, three of which are covered.

Historical records have not uncovered much information about the builder of the home, Reverend Joseph J. Gray, but the second owners were Tippoo S. and Martha Brownlow, who purchased the property in 1833 for $2,500, an enormous sum in that day. Dr. Brownlow, an educator, had operated LaVallee, a female academy, in a building in the northern part of the state beginning in 1829. He moved the school to Gray Hall and continued the school there until about 1850. The western portion of the house, a simple federal style structure which may predate the 1820 house, was moved to its present location adjoining the main house and functioned as the school room. In spite of the support of a board of directors consisting of several prominent local men, the school closed with the Brownlows deep in debt. They continued in residence, farming the land, until 1851 when the house was sold to Joseph B. Batchelor, who in turn sold it to Thomas Willcox in 1853.

Mr. Willcox served as an itinerant minister along the Tar River for some years, but was primarily a farmer, and a successful one. His third child, A.G Willcox, was a full time Baptist minister, who was extremely active in social and community affairs throughout his life. He was instrumental in founding several churches in the area and was a popular evangelistic speaker. He continued the successful farming of cotton, corn, tobacco and other crops, as did his son and grandson. In 1980, the property was sold to Colonel and Mrs. John Collison, who restored the home over the last 24 years.

The house has been faithfully restored to offer the ambiance of an early plantation home supported by modern conveniences. Outbuildings which have been restored include a barn with loft which has been converted to a garage and workshop with ample storage for garden equipment. The smoke house and well house have also been restored.

Original features have been meticulously maintained and restored to preserve the original essence of the house, but equal care has been given the grounds. Many plantings, including the oldest and largest white ash tree in North Carolina, are still in place. The acreage includes formal gardens, woodland, meadow, and a pond.

1820 ambience in the heart of Carolina

Although the character of the original structure has been preserved, the house has modern amenities. For example, there are four heating and cooling units which may be used in a variety of ways to keep the house comfortable while holding down utility costs.
All three out buildings are powered. The garage is a restored barn, complete with generous loft storage and a workshop.
The grounds are ample and the property backs up to Medoc Mountain State Park, however, there is additional acreage for sale adjacent to Gray Hall. 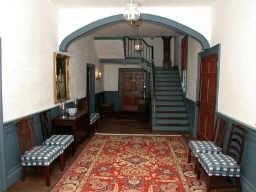 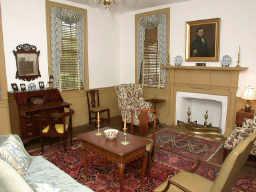